This is a relatively older publication (2018) that I co-authored with my adviser, Dr. Sean O’Donnell, and lab members Dr. Susan Bulova and Katherine Fiocca, titled “Size constraints and sensory adaptations affect mosaic brain evolution in paper wasps (Vespidae: Epiponini)”. By looking across paper wasp species, we can see really big and really small wasps – in fact, the biggest species in our study was 25 times the size of the smallest!

Does getting so tiny have an impact on brain size – or do brains just scale 1:1 with the wasp’s body size? Do different regions of the brain stay relatively larger as body size shrinks – perhaps because they’re more important? These are the questions we set out to address in our study. 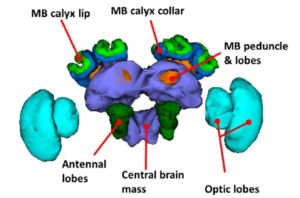 Brain reconstruction credited to the O’Donnell lab and Drexel University.

We looked at several different regions of the brain, represented in this 3D reconstruction to the left. In light blue are the optic lobes which bring in visual information from the eyes. In dark green are the antennal lobes which bring in chemical and other sensory information from the antennae (think of antennae like a wasp’s nose and fingertips rolled into one). We also looked at the mushroom bodies (light green and dark blue) which integrate sensory information and are centers of learning and memory. Everything else we’ll just call ‘rest of brain’ (ROB). If you add all those pieces together you get total brain volume. 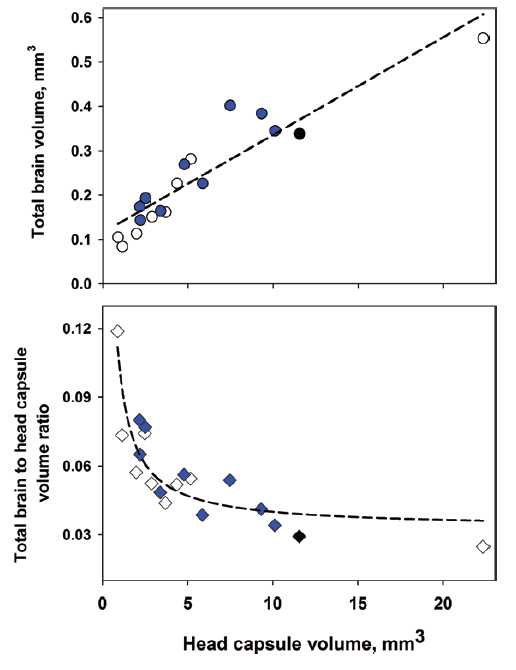 The first thing we found was expected – if you have a larger body (here, measured by head volume) then you have larger total brain volumes (top graph). But, we saw a different pattern when we looked at relative brain:head volume (bottom graph). Basically, however much space your brain takes up inside your head gets increasingly larger as your head gets smaller – so, smaller wasps have bigger relative brains!

This relationship is seen all over the animal world and is known as Haller’s rule; within a group of related organisms, smaller-bodied species have relatively bigger brains in their heads. This could be because you still need a certain number of neurons (and thus a certain size brain) to be able to behave like an organism of that ‘type’.

The coolest thing, however, is that not all regions of the brain change at the same rate. As head size got smaller, the relative proportion of brain volume spent on both antennal lobes and mushroom bodies sharply decreased – but this was not the case for optic lobes. This suggests that wasps may be prioritizing bringing in visual information over other processes/cognitive needs as body size decreases and brain space gets limited. We did find a cool outlier to this pattern, however, in the nocturnal wasp Apoica pallens.

Picture of Apoica pallens wasps, CC-BY-SA 4.0 thanks to ‘Polistes canandensis’

Apoica wasps are nocturnal – so they do a lot of their flying at night, in a really low-light environment. These wasps had very small relative optic lobes for their size – but a relatively larger area of the mushroom body dedicated to processing and integrating visual information. This ‘break’ of the trend suggests that environment can have a big impact on brain resource allocation patterns. In addition, it suggests functional differences for these two pieces of the brain in how they help wasps deal with visual information; the optic lobe may not need to be as large as for day-time wasps because there’s less ‘light’ information to bring in… but processing that information is demanding because its low-light and so the mushroom body collar region is relatively larger than in day-time flying wasps.