My very first, first-author publication (coauthored with the incredible Katherine Fiocca) came out last month in PLoS One (an open access journal, which means anyone can view the article for free, found here). The article is titled “Mannitol ingestion causes concentration-dependent, sex-biased mortality in adults of the fruit fly (Drosophila melanogaster)”; I’m excited to have the opportunity to share some of the main findings of this work with all of you! But first – what even is mannitol? 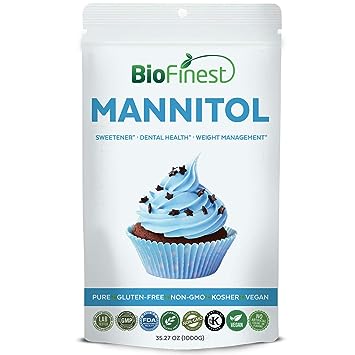 Mannitol is a “sugar alcohol” (don’t worry, it won’t get you drunk). It’s found naturally in fruits and fermented products and (like erythritol and other sugar alcohols) is often used as a low-calorie sweetener. Basically, it tastes sweet to your tongue without increasing your blood sugar levels dramatically. #lifehacks Mannitol is also cool because it’s used medically to reduce pressure around the brain following traumatic injury.

It turns out that when you feed mannitol to different groups of insects you get vastly different responses. This is particularly interesting because mannitol is naturally occurring in some of the stuff these organisms might regularly eat (especially flies that eat a lot of rotting fruits). In some insects, eating mannitol is lethal – in others, mannitol is a carbohydrate they can break down and use for nutrients! Crazy. 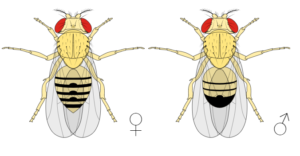 In fact, even within a species mannitol seems to have varying effects. We were interested in following up on a previous study from our lab that showed, at one concentration, that mannitol is more lethal to female than male fruit flies. We aimed to replicate this sex-biased mortality effect, and see if it would be consistent across concentrations (dose-dependence provides strength to a cause-and-effect relationship). We also noted in the previous data set that flies housed in vials with the opposite sex might have been dying more than flies housed in single-sex vials and wanted to follow up on this observation more carefully. Finally, we wondered if this sex-biased effect was consistent at the larval (developmental) stage – or only adults.

Ultimately, we wondered – why is mannitol sex-biased? Is this effect consistent across concentrations? Across life stages? Is it consistent across culturing (single vs. mixed sex conditions) and mating conditions? Understanding the answers to these questions can begin to help scientists understand the mechanisms behind mannitol’s lethality – and perhaps why it affects different insects in different ways – providing us with a tool for studying the biological pathways that underpin insect development, reproduction, and nutrition. 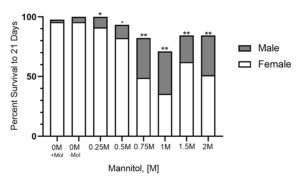 Figure 2 in the paper; stars indicate a difference in survival between males and females.

Mannitol’s lethality was found to be concentration-dependent for both adult males and females (i.e. the more they eat, the faster they die); but females died at lower concentrations and faster than males. However, this was not true in larvae – male and female larvae saw equally reduced survival on mannitol foods! This indicates that the cause of mannitol’s sex-biased lethality is not genetic (i.e. it’s not inherently to do with being a female fruit fly). Instead, it’s something about being an ADULT female fruit fly – perhaps, something to do with the demands of reproduction.

Adult female fruit flies can lay 60 eggs a day after only mating once. Producing all those eggs requires a lot of protein – much more than it takes for male fruit flies to make sperm. To get all this protein, adult females are constantly eating, and when there’s mannitol in the food, this increased food consumption could lead to increased self-dosing with mannitol and thus increased mortality. To support this hypothesis that increased eating might underlie increased female fly mortality, we tested two things:

Result 2: Differences in Food Consumption between Male and Female Flies

To measure how much flies eat, we put liquid food in a tube and (over five hours) measured the change in volume of liquid food per tube (compared to evaporation controls with no flies). Vials of male flies ate significantly less mannitol food than vials of female flies, showing that female flies do eat more food per hour than males. 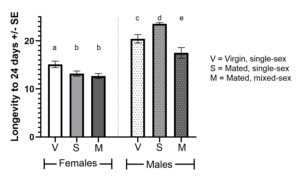 Fig 5 in the paper; letters that are different from one another indicate a significant difference in survival. Longevity is just another way of viewing survival (instead of average # dead, it’s average # of days survived).

Is female fly survival in mixed-sex vials lower than female fly survival in single-sex vials because the females in these vials are mated – or because male flies are present? To answer this, we tracked survival in vials of unmated females housed only with other females, vials of females that mated once but were then housed only with other females, and vials of mated females and males together. For female flies, mating with males once reduced longevity on mannitol foods, even if they were housed with only other females after mating – indicating that the increased demands of reproduction (leading to increased food consumption) may be responsible for reductions in female survival.

Overall, we found that mannitol’s sex-biased effects on fruit flies are not genetically-based (no larval stage sex-biased mortality). Instead, like most other drugs, lethality is concentration-dependent and based on the ‘dose’ the individuals take. In the case of female flies, eating more food to meet the protein demands of egg laying means they dose more, and die more, than males. Preventing them from mating increases their survival, by reducing the nutritional demand of laying eggs. Understanding this mechanism of sex-biased mortality may help us figure out why different species, and different individuals within each species, are differently impacted by mannitol.

More follow-up work on larvae (which had delayed development on mannitol foods) would be a great future direction (and stay tuned…). Additionally, while we know what’s causing the sex-bias in mortality, we still don’t understand the cause of mortality itself. There’s some evidence that polyols cause flies to regurgitate to a lethal extent and dehydrate, which fits with our observation of mannitol encrusted on dead fly mouths. Mannitol could also be accumulating in the body cavity if it cannot be broken down, starving the flies by taking up all the available space for nutritive food. More work needs to be done to understand how mannitol acts as a lethal agent to adults, which will lead to a better understanding of how mannitol affects different insects SO differently!