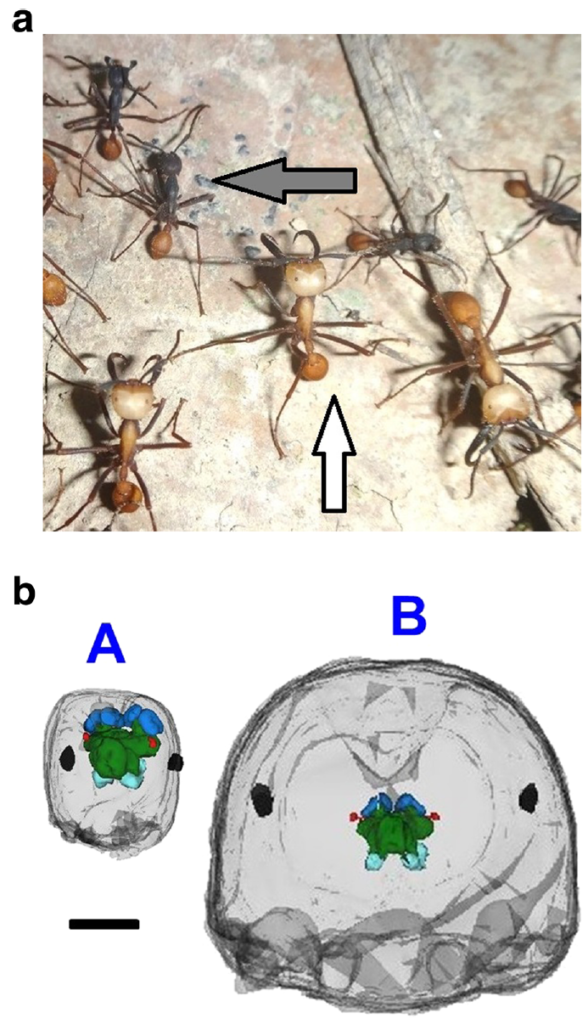 In my most recent publication with Drs. Sean O’Donnell, Susan J Bulova, and Christoph von Beeren entitled ‘Brain investment under colony-level selection: soldier specialization in Eciton army ants (Formicidae: Dorylinae)’, we discuss the differences in the brains of task-specialized workers in multiple species of army ants.

Worker army ants come in a variety of shapes and sizes that generally correspond to the task that worker performs (form meets function). In the case of the Eciton burchellii cupiens to the left (a), the grey arrow points to a small ‘foraging’ worker ant who cares for brood, assembles the nest, forages for food, and cares for queen and soldier ants. The white arrow points to a larger ‘soldier’ worker ant in charge of colony defense (the mouth parts are so large that this ant can’t even feed itself!). Neither of these belongs to the reproductive caste, like queens, yet they look very, very different and complete very different tasks too!

Different tasks impose cognitive loads on the different regions of the brain that help the organism complete them (for example, flight requires an organism to bring in a lot of visual information quickly so it imposes a large load on the visual processing region of the brain called the optic lobes). Since brain tissue is expensive to produce and maintain, evolutionarily-successful organisms will invest more in the parts of the brain that help them deal with the cognitive load of their behaviors (and will not invest in more brain tissue than strictly necessary, to conserve those resources for other tissues like reproductive organs or muscle).

At the colony level, there may be selection across different worker types so that workers, like soldiers, with reduced sets of behavior have smaller brains than other workers, like foragers. In b, above, we see a foraging worker (A) has a much larger brain relative to body size than the soldier (B) – and a similar size brain, even regardless of the differences in body size! 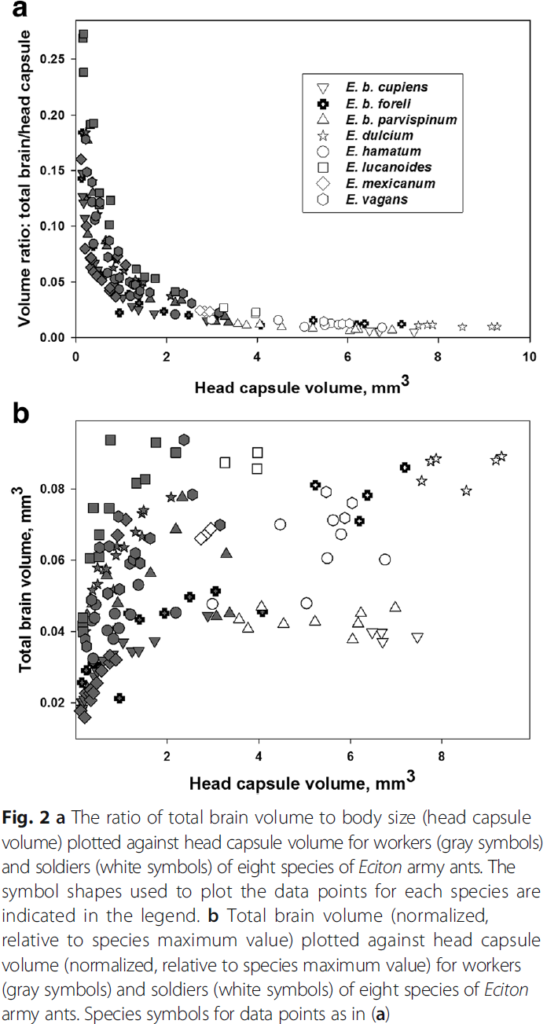 In total, these results suggest that there can be consistent, colony-level selection on the brains of workers in army ants and that specialized soldiers have reduced investment in their brains (particularly in the mushroom bodies and antennal lobes) to correspond with their reduced set of behaviors.