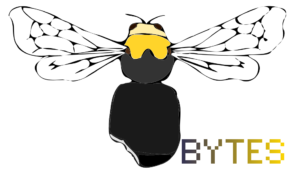 Many people are afraid of bees (and wasps) because of their stingers – but not all of our buzzing buddies actually sting. Which bees aren’t so sharp? 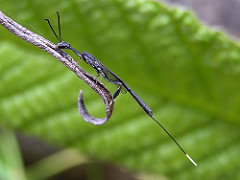 ‘Gasteruptiid Wasp’ by zosterops (CC BY-NC 2.0; link through photo); the long, thin line at the end is the ovipositor.

1. Male bees (of any species) – A stinger is a modified version of the egg-laying part of a female bee’s body, called the ovipositor. Since males were never meant to lay eggs, they never evolved a stinger.

Despite not being able to sting, many male bees will buzz loudly and curl the end of their abdomen towards anything that grabs them. This mimics a female’s stinging position and the behavior is scary enough that even experienced bee handlers will often reflexively let go!

2. Stingless bees – The meloponines, or stingless honey bees, are a group of approximately 500 species that live in tropical and subtropical zones. Stingless is a bit inaccurate – female bees have stingers, but they are so tiny they cannot pierce human skin. 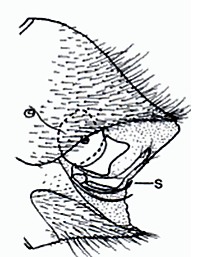 The ‘s’ points to the incredibly tiny stinger of a meliponine bee. The lips on either side with the hairs are the ends of the abdomen. Michener [2000]

Fairy bees (Perdita), and other mining bees (Andrenidae; ~3000 species), lack the part of the stinger that pumps venom, rendering them effectively stingless. Not to be outdone, the Dioxyini, a group of cuckoo bees that lay their eggs in the nests of other bees, have the most reduced stingers of all!

3. Most bees, most of the time – While male bees and bees with reduced stingers may be incapable of stinging you, bees only use their stinger if they are in danger. If you see bees (or wasps), leave the fear behind – move slow and watch your step, and you’ll leave sting-free.

*This post modified and condensed from one written for Buzz, Hoot, Roar in 2017- check out their short, informational posts on all kinds of natural life here.

Generalist. Widespread. Solitary.           Name: ‘The Green Sweat Bee’ (there are several) Family: Halicitinae (with: other sweat bees, alkali bees) States: Most likely all except Hawaii and Alaska   Agapostemon Read more…