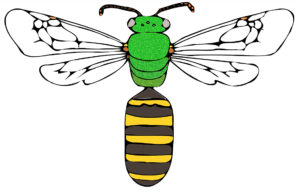 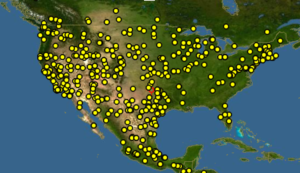 Name: ‘The Green Sweat Bee’ (there are several)

States: Most likely all except Hawaii and Alaska 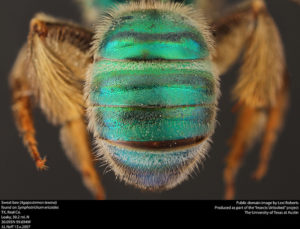 Of all the Agapostemon, A. texanus is the most widespread, appearing from Costa Rica to Southern Canada. In the US, it is most common west of the Mississippi River. A. texanus has two generations a year, with mostly males active in the early fall and mostly females hibernating through the winter and active in spring and early summer (this split is due to a unique system called haplodiploidy).

Female A. texanus are strictly solitary, though females of closely-related species (like A. radiatus) have been found to make all their nests together in one area (called an aggregation) or potentially even use singular nests communally (A. nastus). 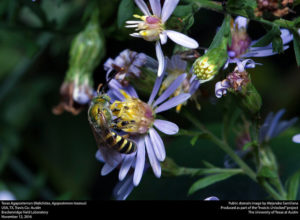 A. texanus nest in the soil, creating long tunnels by digging. Females search for dark spots under pebbles or leaves to construct the entrance to the nests, making nests hard to spot by parasites. Females leave their nest open during the day as they forage on a variety of flowers (A. texanus are generalists) before closing the nest entrance in the late afternoon/early evening by pushing soil up from inside the main tunnel to close the door for the night. High security area!

Nests tunnels have been found up to 150 cms deep (nearly five feet!).

Sources and Further Reading (first is freely available and has a great drawing of an A. texanus nest!):