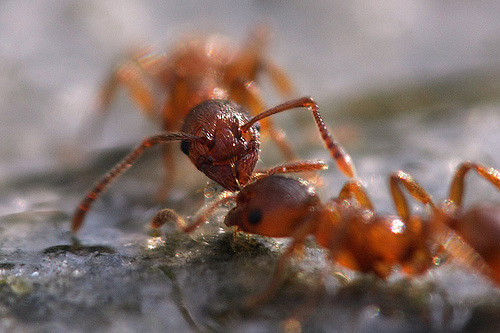 A huge thank you to, first, Palaver Magazine for publishing this piece here on page 79, and then for Poetry in Data for also publishing this piece here (you can listen to the poem here). I must also acknowledge Dr. Wulfila Gronenberg, as this is a found poem sourced from his 1999 paper: Modality-Specific Segregation of Input to Ant Mushroom Bodies. All of the words in this poem were found in the various sections of Dr. Gronenberg’s paper and – as is the case with all found poetry – it is the essence of the source that provides the true poetic inspiration.

This paper is the foundation for my work in ant neuroanatomy (paper forthcoming, stay tuned!). There is a section of the ant brain called the mushroom bodies, which is known to be involved in learning and memory (among other complex behaviors). There are two regions (the lip and collar) which receive input from different peripheral processing lobes: the optic lobe (which processes visual information and inputs to the collar) and the antennal lobe (which processes chemo-sensory information and inputs to the lip). This study by Gronenberg compared the size and structure of the mushroom bodies across several species of ants, wasps, and different genders of ants (which have vastly different behaviors over their lives).

Based on the differences in mushroom body size between the species, Gronenberg was able to tie individual variation to species-specific behaviors and living conditions. One example would be variation in the role of vision in the ants’ lives. Ant species with reduced eyes had reduced optic lobes and mushroom body ‘collar’ regions (a region we know to be associated with the input of visual information). If you don’t have large eyes, you likely aren’t processing much visual information – so you won’t need large brain regions to deal with vision.

The collar regions of males were found, across many species, to be much larger than that of female workers; male ants fly through the air to find females and mate, giving vision a critical role in their behaviors as compared to grounded, sometimes subterranean female workers of the same species.

Gronenberg showed there was a common design among Hymenopteran (ants, bees, and wasps) mushroom bodies, as well – making this one of the earliest studies to look into mushroom bodies outside of honey bees and Drosophila flies.

A big thank you to Palaver magazine for publishing this poem; you can read it here (pg 75) or hear me read it aloud here. Deepnight is another poem in my sugar maple cycle; when I first began Read more…