A big thank you to Palaver magazine for publishing this poem; you can read it here (pg 75) or hear me read it aloud here. 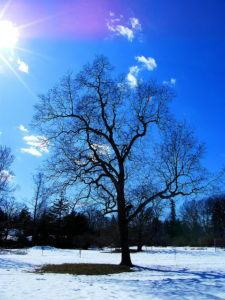 Deepnight is another poem in my sugar maple cycle; when I first began working on this poetry series and thinking about trees more deeply, I came to the conclusion that trees wouldn’t obey our seasons. So I created what I thought were important ‘seasons’ for trees: Sunleaves, Deepnight, Sapriver, Budbreak, and Windborne. Deepnight occurs after the trees shed all their leaves and enter a state of dormancy until the days become longer and warmer again.

As the days gets shorter, less chlorophyll is produced in the leaves, allowing for the other colorful chemicals that were already there, such as anthocyanin (red) and carotenoids (orange), to be ‘uncovered’. The sap sent to the leaves to grow and sustain them is now instead sent to the roots, stored there throughout the winter to be used to power the next generation of leaves after Deepnight is over. Water concentration in the cells of the tree is reduced (increasing the concentration of solutes like glucose), in order to lower the temperature at which the cells will freeze through disrupting ice crystal formation.

Layers of abscission cells (often with modified, weaker cell walls) are formed where the leaf meets the branch of the tree; this means that, eventually, one hard gust of wind will knock the leaf off the branch.  Abscisic acid plays a role in endodormancy (a non-growing phase for a plant caused by conditions like cold, lack of light, etc) – though that role is currently poorly understood (originally, it was believed to play a role in abscission but scientists now believe it has some other function).

Some parts of the leaf will be actively broken down as the leaf slowly dies, its grasp on the tree being weakened by the abscission cells, until the tree is finally rid of all the leaves and enters dormancy, waiting for the days to grow longer again.