The Pesticide (maybe) in Your Coffee

Insecticides are a huge industry in the United States – whether we’re talking the small-scale can of Raid for your kitchen counter ants or the much larger scale agricultural market. But what if there was something already on your kitchen counter that might take care of those ants for you?

Erythritol is the main compound found in Truvia, a common artificial sweetener that many people use for baking or their morning Cup o’ Joe. Erythritol is a non-nutritive sugar alcohol – so while it sweetens your food, it can’t be digested by your body. The fact that it is sweet (like sucrose or other sugars) makes it attractive to insects such as Drosophila melanogaster, one species of small fruit fly that is a very common organism for scientific study. In this case, attractive can also mean deadly. 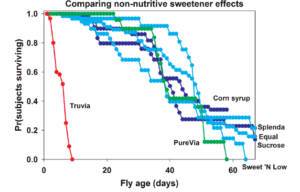 My lab published its first ground-breaking (what, can’t a girl brag?) paper on erythritol in PLoS One, entitled “Erythritol, a Non-Nutritive Sugar Alcohol Sweetener and the Main Component of Truvia, is a Palatable Ingested Insecticide” (Baudier et al 2014, before I arrived). As you can see on the graph to the left, flies that ate Truvia had significantly decreased longevity as compared to flies fed PureVia, Sweet ‘N Low, Sucrose, Equal, Splenda, or Corn Syrup. It’s a pretty drastic split. They also ran an experiment confirming which compound in Truvia was the killer compound (spoilers above: it’s erythritol). 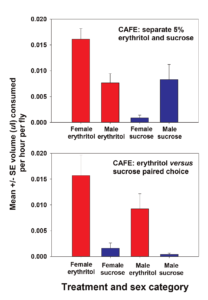 But it doesn’t matter if erythritol kills the flies if they won’t choose to eat it! So Baudier et al. ran several CAFE experiments; one gave the flies access to both sucrose and erythritol of the same concentration and measured how much of each solution the flies ate over time (bottom graph of the figure to the right). As you can see, the red bars are much higher than the blue for both sexes – the flies, when presented with a choice, ate more erythritol than sucrose. If that trend were to hold in the wild, that would be very good news – the flies would self-select to eat the pesticide over other available foods containing non-lethal sucrose!

While this paper looked at a few more things, the last piece of the puzzle I want to talk about here is the effects of higher or lower doses of erythritol on fly longevity. The graph below shows that flies fed two molar erythritol all died within 48 hours! That’s incredibly fast-acting for a pretty tame pesticide. 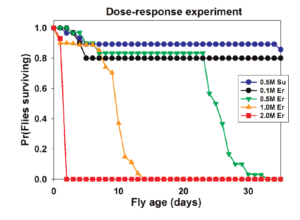 I hear you saying: “Okay, Meghan, but this is all about flies. Didn’t you promise me that I could take out ants with this stuff?” A recent study by another lab has shown that erythritol works against Solenopsis invicta – the red imported fire ant that causes so much trouble in the United States and abroad. While that probably isn’t the species of ant you have on your counter, it is a promising sign that this stuff may just work on many different groups of insects – from flies to ants, perhaps beyond.

And because erythritol is found in a sweetener meant for human consumption it has been rigorously tested by the FDA and is known to be human-safe (though if you eat a lot, and I mean a lot, of it all at once it may have a laxative effect). In other words, you can feel better about spraying this stuff onto your countertops than Raid. Compared to neurotoxins and other nasty chemical pesticides, erythritol is also thought to be more environmentally friendly too!

Did the fruit flies in your experiment consume only truvia granules or did you have to prepare the truvia to entice them to eat the sweetener? Would they eat only truvia if presented by itself? Thank you.

Thanks for your excellent questions. In our experiment, we separated Truvia into its component parts and utilized only ‘erythritol’ (the part of Truvia that actually causes mortality). We mixed this erythritol into standard fly foods – though I never tried it, it is my guess that the flies would not be able to eat erythritol on its own (its a powder or sugar-like crystal, neither of which would be consumable with a fly mouth). Standard lab diets for keeping flies include things like yeast for protein, molasses, cornmeal, water, and agar to make it a ‘gel’ consistency along with some preservatives. We simply mixed erythritol into the standard lab foods.

A good question, however, is if we can make baits with erythritol in them that the flies will eat: will the presence of the erythritol attract them? repel them? Or are they not able to sense it at all? Previous work conducted by my lab showed that it was non-repellant (though likely not attractant) to fruit flies.