I’m so thankful to UnLost magazine for publishing this poem last month; you can read it here or listen to it: here. You can find the scientific journal article it was ‘found’ in here. 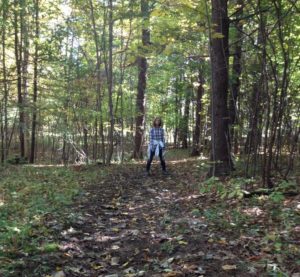 This poem was directly inspired by a paper entitled ‘The allelopathic effects of juglone and walnut leaf extracts on yield, growth, chemical and PNE compositions of strawberry cv. Fern’ by S. Ercisli, A. Esitken, C. Turkkal, and E. Orhan, published in 2005.

The paper, as the title suggests, looked at the effects of juglone (a chemical produced by plants in the Juglandaceae family, like walnuts) and Persian walnut leaf extracts on the yield, growth, chemical and plant nutrient element composition of strawberry plants. Juglone occurs in pretty much every part of walnut trees – including the roots, bark, leaves, and fruit – and is known to have toxic/growth stunting effects on nearby plants. In my part of the world, it’s why we’ll sometimes see stands (groups) of black walnut trees growing isolated from other species; the juglone in the leaves that drop to the forest floor every year, and in the roots, causes many other species to die off if they are sensitive to juglone (like potatoes, pine trees, white birch, or eggplants).

The overall picture? It appears that strawberries are pretty sensitive to juglone; if you want a good yield, avoid planting them directly under a walnut tree (particularly black walnuts – which have the highest concentration of this phytotoxin)! The good news is, juglone is not very water-soluble and thus doesn’t travel far in soil. The highest concentration will occur directly under the canopy of the tree – so the further out you go, particularly once you exit the ‘root zone’, the better off your plants will be. Other trees – shagbark hickory, for one – do also contain juglone, but at a low enough concentration to generally not affect even the more juglone-sensitive plants.