Many of you have probably heard of the STEM pipeline dripping – that is, the idea that we’re losing lots and lots of students at each step of the educational process. Perhaps the step that is most relevant to me as someone who wants to go on to be a professor: only about half of those students who enter college in a STEM major will graduate with a STEM degree. This is already a sad pronouncement – we are losing so many of our students to things like poor class and assessment design, a lack of awareness of mental health issues, and a dearth of research opportunity to keep people engaged. These are all problems that, as a student of the PROFESS program at Drexel, I aim to learn about fixing. 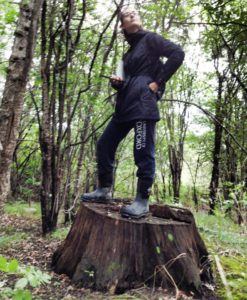 Me, a young woman scientist, STEMMING it my senior year in undergrad.

But to actually have an impact, I will need to become a professor – and the STEM pipeline prognosis for women, and for minorities, is sadly far worse than that for overall scientists. According to a UC Berkeley study on chemists, women make up roughly 50% of college graduates in the field – but only 37% of PhDs, 22% of associate professors, and a measly 12% of tenured professors. There are many things that explain this ‘drip’ of women from the field (feels more like a gush than a drip, honestly) – they include everyday sexism from the ‘good old boys club’ of science that goes all the way to the top, wanting to earn higher salaries outside of academia, or needing time to start a family – which might not be compatible with the format of tenure-track jobs.

What I think this study, and others like it, show is that we’ve done a good job with outreach to girls to get them interested in science – despite the fact that female scientists are historically forgotten about in favor of their male counterparts (*cough* Rosalind Franklin *cough*) in our culture and the classroom, and despite the fact that science is more actively marketed to boys, we still see about 50% of our undergrads are women in several (though not all) STEM fields. Certainly, more outreach to young girls would not hurt, particularly in fields like IT, Engineering, and Physics where women are still under-represented even in bachelors programs. But this quote really resonated with me, about what the actual problem is here:

“You can tell a girl she’s smart her whole life, encourage her in school, buy her a chemistry set, send her to math camp, help her apply for college scholarships in STEM fields, and she’s still eventually going to walk into a classroom, a lab, or a job interview and have some man dismiss her existence, deny her funding, pass her over for a promotion, or take credit for her work. How about you work on getting those [people] out of power and quit telling me not to call girls pretty” – kelsium

The study in PNAS does indicate that they don’t know how many women applied to work in these labs – though they cite high rates of sexual harassment and negative attitudes towards maternity as reasons why many women may steer clear of male-dominated labs. The bottom line is that women in STEM are not being treated fairly or given access to equal opportunities – not really surprising, given how recently women were even allowed to start having careers at all.

Undeniably, women have made incredible strides in the last sixty to eighty years – at least at the undergraduate level. But the anti-woman bias held by the ‘good old boys club’ that has been the norm for the past 600 years of science needs to change and effort needs to go into enacting policies that work from the top down. Policies that support women in cases of sexual harassment, hiring bias, and family planning. Until these policies are enacted, no matter how many chemistry sets we give our young girls, we will not see a change in the gushing STEM pipeline for women.

I arrived back from my first field season in Arizona on May 5th, and have been running around like mad ever since – trying to process specimen, taking my qualifying exam, and prepare for my Read more…