The Important Part of REsearch

If I were to sum up the entirety of my fall 2016 quarter, my first three months as a PhD student, the most important lesson I’ve learned is that research is not about the ‘search’ part as much as it is about the ‘re’. Or rather: the ‘search’ is the end goal, but the ‘re’ is how we get there.

Research is about redoing things, over and over, tweaking things slightly until you get it right (at least, for that one time). It’s about understanding that every experiment that doesn’t turn out as you hoped does not mean it’s time to give up – instead it’s time to try again, and figure out what went wrong. Never have I had so many PCRs or DNA extractions come back negative. It can be incredibly disheartening to do hours worth of work, over and over, to get back blank gels with nothing but perfectly fluorescent ladders.

Similarly, what does one do with a brain that doesn’t stain when you add DAPI (a stain that binds to DNA – something all brain cells should have)? Or with FITC (another stain that should 100% light up under the microscope if there are cells present)? What do you do with brains that are so soft they’re almost impossible to dissect out of the cephalothorax? Or with an embedding procedure that has worked perfectly for hundreds of soldier ant heads that suddenly starting turning brains into glue?

Sometimes the problems aren’t obvious at first glance; say, a broken piece of machinery that throws your results for two weeks until you figure it out. Other times, you get odd results – some primers that show your DNA extracted, others that show no extraction occurred at all. These odd results can be compounded by the fact that your experimental primers are successful in amplifying samples that your more universal primers appear to miss entirely. What does it all mean? (hint: I still have no f***ing clue)

And to me, this is the big lesson of the first quarter; what 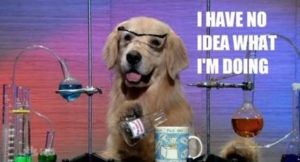 differentiates a PhD researcher from a hired
hand. The PhD researcher must figure out these complex questions – must figure out where to go next to make things work and what to throw at the experimental wall to see if it sticks. The hired hand, or the undergraduate, simply performs route tasks – but at the end of the day, can leave when things don’t work out.

This has been an especially hard lesson for me as a lifelong perfectionist; I’ve come home numerous times this quarter to tell my fiance that “I’m a failure” and questioning “Why am I so bad at such simple research tasks?” and “Is this really for me?”. But I am getting the idea that, to survive in science, I must let go of the notion that everything will go perfectly and be in my control; I must get used to the idea of moving past mistakes quickly, and figuring out new directions to push through unanticipated problems. There is not time to wallow in what went wrong – to take an angry “it’s all my fault” attitude. The immediate response, whether I did truly make a mistake or not, must be to move forward and stop punishing myself for the imperfections that are going to occur – with high frequency – in my scientific career. Because I won’t make it if I hang on to these unrealistically high ‘perfection’ expectations – amazingly, I’ve come to realize that perfection is what will stifle my career before it begins.

This has some application to my writing life too; how many books have I re-written the first six chapters of, striving for perfection before moving on, only to never finish the book? Striving for the perfect first chapter means the first draft, imperfect as it may be, will never be realized. We’ve talked about the importance of failure before on this blog, but this is about more than failure; it’s about recognizing that the goal of perfection is, in itself, a failure to honor reality.

Who knew that PhD school might be more about reflection on your own character than learning scientific concepts? Huh.

So, moving forward, I’ve got steps I need to take whenever I recognize the creeping sense of worthlessness that happens when something goes wrong:

I’ve been really lucky to have an amazing mentor, Susie, in the lab who has shown me this kind of let it go and move forward attitude multiple times this quarter. When something goes wrong, she doesn’t play the blame game – she says “huh, that’s odd” and then immediately looks for a way forward. I’m a long way off from that kind of attitude – but I hope I can start modeling that behavior soon enough.

Do you have a perfectionist problem? How have you tried to move past it – and how has it affected your life? Let me know in the comments and thanks, as always, for reading!