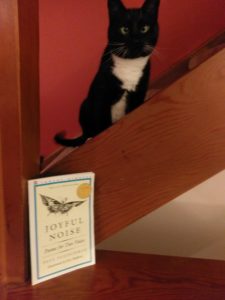 When she looks silliest is when you can best see how cross-eyed she is.

A shout out to my good friend Grace is in order, for giving me this book because “it’s about insects and poetry” which, apparently, defines me.

Joyful Noise: Poems for Two Voices by Paul Fleischman definitely has a unique structure – the poems are meant to be read aloud by two readers, sometimes alternating, sometimes in a round, sometimes together. It seems like it would create a really lovely “chorus” effect that is perfect for a book about insects, often the background collective accompaniment to our world. Unlike our arthropod buddies, however, I think the book’s voices would require practice to be artful; a cold read with two people would be a bit awkward and stumbling given people’s different reading styles. Because of the childish nature of the book (I’ll get into this more in a bit), I see this working well as a performance piece for a classroom of children or as a frequently-loved bed time story.

The language of the book is really simple and childish and what particularly irritated me was the constant rhyming. I know, I know; rhyme is the red headed stepchild of contemporary poets. It can be done well and with purpose, or it can be done in a sing-songy way; this book had the later. Very few poems paid much attention to sound, surprising given that this book was written to be an auditory experience; there were no moments where I closed my eyes to savor the echo of the words, but “Mayflies” and “Requiem” I thought had the best attention to sound of the lot.

Many of the poems did contain humorous twists at the end, like “Water Striders”, which are perfect for children in that they feel like that overdone moral-of-the-story moment. The poems did get to be pretty repetitive, however, most of them following the “We are ___ insect” format, which got really boring after poem three. I wanted a change in perspective and form to liven things up and distinguish the insects and poems from one another, particularly since the poems were so light on detail, imagery, depth of character/perspective, etc. They really blended together into one giant rhyming song. 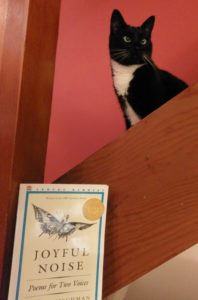 Nyx: *Probably looking at a bug outside right now*

The poems contained very few mature concepts, though death and the hunting habits of wasps are brought up in surprisingly gruesome detail (when juxtaposed with the rhyming, immature poetic style and likely intended audience). Still, it was very basic scientific information throughout – book lice eat books, mayflies don’t live very long, water striders walk on water (with no mention of how or why). Overall, it’s a good book to introduce children to the idea of insects in a comfortable, non-threatening way, given that insects are often viewed as a scary foe. This book definitely works to combat that perspective with a light-hearted, positive spin on our insect friends.

The book has some gorgeous illustrations throughout, thanks to illustrator Eric Beddows, so even if you’re an adult it would make this book fun to flip through in the store. The poems “Book Lice” and “Requiem” were my favorites; the humor in “Book Lice” (despite the childish imagery and language) was amusing to a word nerd like me and “Requiem” was perhaps the most grown-up poem; it stuck out to me as something different and thus enjoyable. If you’re looking for a book to read with kids, give it a go; otherwise, I’d tell adults to pass on Joyful Noise.