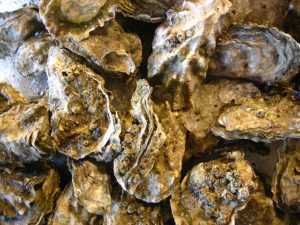 First, a big shout out to all the sins for publishing this poem in their inaugural issue; you can find the link to the poem here, or listen to me read it aloud here.

Crassotrea virginica is one of five species of oysters. C. virginica is an Atlantic-dwelling species and the northern-growing varieties, living in colder waters, are known for their intense briny flavor. They are the type of oyster that a person eats, which means that they will not produce pearls. Pearl-producing oysters are from the family pteriidae (as opposed to eating-oysters from the family ostreidae) and generally live deeper in the ocean than eating oysters.

Oysters, eaten raw, are considered to be a luxury food – just as pearls are also a symbol of wealth. I found this juxtaposition, of food and inedible material both based in the same type of shellfish and also symbols of riches, to be really fascinating; it was the socioeconomic context of oysters that really pushed this poem into being more than the science.

It’s said that oysters taste better in the winter as they can be kept cold and fresh easily from the moment they’re harvested. Oyster shells, filled with calcium, can theoretically help plants grow in gardens if used as fertilizer; the calcium can reduce soil pH, add need nutrients to the soil, and strengthen cell walls (supposedly – it’s up to you if you trust this source). I wouldn’t recommend just chucking the shells into the garden though; it seems likely they would be difficult for your average soil-living microbe to break down. Crush your shells up first, and you’ll get some healthier, happier plants!