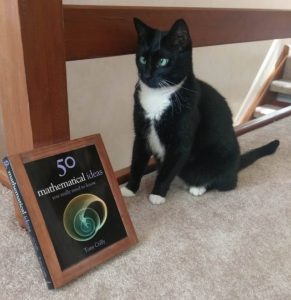 Okay, so this was a bargain book I picked up because it had the word ‘topology’ on the back and I had very recently become faintly aware of how neat this area of math actually is. The book has some cool features (timeline to accompany each concept, good graphs and illustrations), but unfortunately I’m not going to be able to recommend it on the basis of:

To the first point, Crilly struggles with syntax. Consider the sentence “It was a clever each way bet”; it makes one pause. A better construction would be “It was a clever bet, either way” or “Either way, it was a clever bet”. This is one simple example of poor sentence structure; when we get math entangled with this poor writing, it makes the book far too easy to put down.

I think this book also really struggles with knowing its audience. Crilly obviously isn’t trying to appeal to mathematicians, but he includes concepts that nearly everyone knows alongside concepts more foreign to the average reader. There are very few readers who don’t already understand what a number system (or literally zero) is who also want to learn about Riemann’s zeta function. Crilly could have done a book about the five things you need to know and given us more story (and math!) to boot. And unfortunately, story would’ve been really helpful because the book was a tad bit dry. I relished the bits of history and humor when they were included and would have loved more and for the story to be woven in with the math instead of plopped down ungracefully in separate chunks. 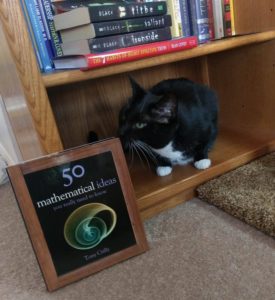 Nyx is mostly concerned with the taste and smell of math.

I will say that math and physics are the areas of science where I am most uneasy. When I wrote a collaborative piece on mosaic knot theory for my undergraduate Neuwrite/edu chapter, I worked with a brilliant mathematician and physicist. It still took us nearly a year for me to write our piece; an essay that shied away from the math whenever possible in favor of telling a story. Math has never been my main love or interest, but I wonder if wrapping math/science in stories might ease the terror many people feel when encountering theoretical math concepts and broaden everyone’s mathematical horizons. Clearly, that was not Crilly’s intention here, so I can’t really fault him for not doing that – after all, ’50 Mathematical Ideas’ will clearly be some kind of a list. Still, it was clear to me that this format was part of the reason I found the book to be disengaging.

What I would recommend this book for is a quick scan of the back cover – find the five things you don’t know much about and spend the afternoon researching those things instead of reading this whole book. Personally, I recommend topology, fractals, the travelling salesperson, relativity, and the parallel postulate (which encompasses non-Euclidean geometry!).