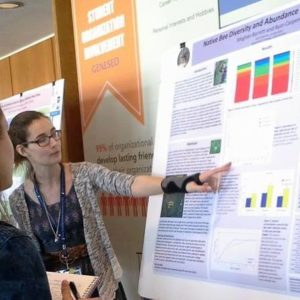 This is a photo of me, talking confidently – practically non-stop – about my research on “Native Bee Diversity and Abundance” at my undergraduate college. A student, bottom left, dutifully takes notes for a write-up she’ll be doing later for extra credit. Inside, not visible to the viewer, I am practically paralyzed in fear. It’s not just because it was one of six presentations I had that day. It’s not (only) that I hate public speaking. It’s because at most of those presentations, regardless of my credentials, I feel like an impostor – someone who shouldn’t be there, someone waiting for others to figure out that I don’t belong either.

This affliction is labeled “impostor syndrome” and it’s something I’ve seen a lot of writers, particularly those about to start MFA programs, mention. While many suggest it gets better/easier the longer you’re at something, it affects some people throughout their entire careers; like this literary agent and editor or even Maya Angelou who, having published eleven books to great acclaim, said “I have written 11 books…but each time I think, Uh oh, they’re going to find out now. I’ve run a game on everybody, and they’re going to find me out.”

Unfortunately, I haven’t seen it mentioned as much in the science circles, although I freely admit that I see less science blogs than writer blogs in general. When I am in the company of other writers, I take some solace in the fact that – likely – some of them also feel this way:

But now I have a book deal, and I still feel like a fraud. My agent and my editor are wrong; my book is terrible; no one will buy it; the reviews will be heinous; and soon everyone will see me for what I really am: a desperate woman sitting in a workshop while two real writers dismantle all her feeble pretensions. Sometimes I feel so anxious about this impending disaster that I’m even a little bit impressed with myself, because it’s astounding that someone with such crippling insecurities can even get out of bed, much less continue to write. – Heather Young

Knowing that so many other writers are going through this puts me much more at ease. But with other scientists, this lack of confidence, this completely overwhelming insecurity, is rarely talked about. When I walk into the lab to see my fellow scientists hard at work rushing around testing hypotheses, I quickly become overwhelmed. I’ve only done two surveys and one molecular study – and I didn’t really understand the whole process. I’m going to fail out. How did I convince everyone to let me make it this far? I forget everything as soon as I learn it – how am I supposed to make it six years and do my own research? I can’t fool these, guys!

I can’t give much attention or time to these anxieties or they quickly get out of hand; but every moment I am in the lab, they’re there. Nagging. Causing my voice to shake when I talk to my adviser; making me stammer. When will they find out?

So I decided to write this post – first to reassure any other lonely PhD candidate out there that yes, impostor syndrome is a thing and you (and I) should be fine. I did find some other resources about impostor syndrome in Science/PhD programs – here’s an article from Science and one from HigherEd and here’s a more personal account from the blog of Megan Fork, an Environmental Research PhD candidate at Duke. It’s natural and okay – as a writer, a scientist, a student – to feel this way. And you are worthy of your success. You, my friends and fellow self-labeled impostors, worked hard for it.

Part two of this post will be coming in a week or so – where I give some advice about how to deal with impostor syndrome. Do you have any tips or tricks you’d like to share? Feel free to drop me an email or a comment!

Five Tools for Writers and Scientists