The dreaded rejection, the abhorrent failure. I’ve been doing it a lot lately, which means that it’s a good thing we’re up to the ‘Fail Better’ section of the DIY MFA curriculum. The whole acronym Pereira has for FAILing better is really helpful, but today I’m just going to focus on the ‘F’. 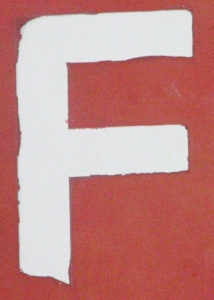 Failing has always been hard for me; at the risk of sounding appallingly obnoxious, I’ve been good enough at enough things in life that I was able to avoid failing for a long, long while and still be very busy. I skirted things that were important to me – auditions for musicals or a capella, sending out my writing to journals, etc – because I could just as easily do things where I was less likely to fail (writing for the school newspaper, running a sorority, stage managing). I even avoided taking poetry workshop for two years because didn’t want to face the facts that I was probably a terrible poet… so I took nonfiction three times instead (I had never even tried nonfiction before and thus didn’t have to care if I was terrible).

This issue (avoiding failure by choosing not to try for things that mattered to me) came to my attention right as my senior year of college began. I’d promised myself before coming to college that I would audition for an a capella group – every year, I had backed out last minute. Now, this cool September weekend, was the last chance to audition. With almost no practice or warm up time (coming straight from a hands-on outdoor volunteering gig) and with a ‘devil-may-care’ attitude, I went in and botched the audition. I told myself it didn’t matter, because I hadn’t really tried anyway and I was a senior so they never would’ve wanted me and I hadn’t had time to prepare (*ahem* four years) and…

I soon realized that I was a failure at failing and it needed to end if I was going to really live my life. So this summer I’ve really been pushing myself to fail, mostly with my writing, by sending out work whenever possible just to get used to the feeling of failure. Failure when you think a poem is beautiful. When you think your work is a perfect fit for the magazine. When you know your book has true potential (but you’re actually just not ready). Picking up that shattered heart and moving forward can’t be something I’m afraid of doing, or I’ll never achieve my real dreams.

It turns out I’m in the midst of the ‘F’ section of Pereira’s ‘FAIL better’ – Face your Fears. I am very, very afraid of my work never being good enough to be publishable. This is a reality I wouldn’t have to face if I didn’t ever try to submit my work. But that is just failing to take action, to take hold of reality and to progress. So I’ve faced (am still facing, will face for years) my fear instead.

I take a bit of solace in Pereira’s honest and encouraging story because unlike the ‘author bios’ at the back of so many books*, she instead tells us her journey was hard and several years long but that if you persist, against all odds, you may succeed. Succeed in crafting something beautiful and meaningful, even if only to a handful of readers and yourself. Succeed, but in your own sweet time and likely after learning to fail better again and again.

*(reading: So and So was Miss Universe, published her first bestseller at twelve, went on to start a Forbes 500 company at 29 and now is a sushi chef, writing five books a year that are translated into thirty languages while managing seven sets of quintuplets and earning four PhDs, what are you doing with your life, you worthless POS?)

So far, I’ve had a micro-chapbook and a novel manuscript rejected from publishers and at least eight magazines reject my poetry (and the list is growing and growing). I cling to the rejections that have lines like “we hope you’ll continue sending us work” as though it means something other than a form letter; maybe I was so close and they just need something a bit different. Anything to see me through letting it go to feeling determined to try again.

I’ve come up with an idea to try and manage this hurt called the ‘Try Again’ list, where I put all the information of the places that have rejected me – the editor, the name of the press, the work that was sent back. The goal of this list is to try all these places again; at least one more time. To go back for more hurt. And if work is ever accepted on the second or third or fourth try, I will change the color of the name of the magazine in the list. I will show myself that the failure was just one step on a journey to success and that, because I persisted in the face of objective failure, I succeeded.

Do you have any tips for dealing with rejection or even celebrating it? Share them with me in the comments below!

Meghan, I loved this! It’s definitely something I have to work on, too. On Habitica a couple days ago, I added a habit that says “Fail at something!”. I hope to be more aware of things I’m afraid of failing at and hopefully start to consciously try them anyway.

That’s a great idea, Bonnie! Sometimes just being more aware of the need to fail (and rewarding yourself for doing so) can make all the difference. Habitica is an excellent reward system and progress tracker for that kind of goal.
Thanks for commenting!
Meghan