‘Bee’ Reviewed: The Life of Galileo 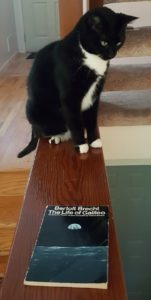 It left Nyx with a lot to think about…

This week on ‘Bee’ Reviewed we have a fictional but historical science play – The Life of Galileo by Bertolt Brecht*. Similar to Michael Frayn’s famous Copenhagen, Brecht seeks to imagine the historical life of a scientist – though he extrapolates beyond one isolated moment and portrays a fictional accounting of most of Galileo’s life. The book follows his early years with an apprentice, his controversy with the church and subsequent house arrest for supporting the heliocentric theory of the universe, and finally his last act of defiance, the dissemination of his collected scientific work.

The play has received both praise and criticism for it’s treatment of Galileo; Galileo is a ‘struggling’ underdog – defined, in large part, by his self-interest and not any sense of ‘heroism’ through defying the church. He has several ugly vices that serve to paint him as an un-heroic, occasionally unsympathetic, character – certainly an unscrupulous one. And yet he is still very much the underdog, pushing for truth and science as much as his self-interest will allow, against the overpowering institution of the church. Despite his less-than-stellar qualities, we’re still rooting for him to win.

People come down on both sides of the argument regarding this characterization – some love the humanizing effect that the vices have on Galileo, showing scientists are still ordinary men with fears and bad habits, others felt it did him a disservice by not painting him as a historical hero, bravely fighting for truth against extreme adversity. This debate is exacerbated by the many liberties Brecht took when portraying Galileo’s personal life, going so far as to change the real details of his relationship with his daughter (among other fabrications). While the science and struggle with the church are generally seen as historically sound if still fictionalized accounts, the portrayal of Galileo’s personal life in the play is questionable at best.

This play is a fast and entertaining read; it’s filled with humor as much as tragedy and hard decisions, and I loved immersing myself in Galileo’s struggle, a man who (unscrupulous or not!) changed the face of science. The dogma v. science debate is very obvious in the play and hangs a heavy cloud over the work – to be expected, given that this debate was the heart of Galileo’s everyday life. The dialogue is well-written; the monologues are moving. Despite (obviously) knowing the end of the play, I found the interactions between Galileo and members of the church to be surprisingly suspenseful. If you’re a fan of science plays, or the history of science, I would recommend reading this play; while it may not be the most accurate portrayal of Galileo the person, it does a good job showing off his science, dealing with the human nature of scientists, and portraying the important dogma v. discovery debate. One of my favorite lines:

“THE LITTLE MONK: But won’t the truth, if it is the truth, prevail – with or without us?

“GALILEO: No. No no. As much of the truth will prevail that we make prevail.”

*Please note that Brecht produced many versions of this play – the one I read was The National Theater Version, Translated by Howard Brenton, first published by Eyre Methuen Ltd in 1980.