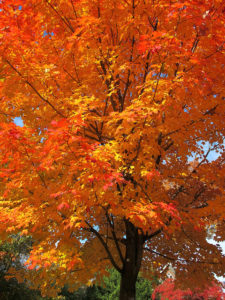 First published in Gandy Dancer, 4.2, Spring 2016. As a new feature, you can now hear me read aloud the poem here and I’ve updated the past Biopoetics posts with their readings.

This poem is a lot more abstract and less concrete-science than other past poems, but it deals with the season of ‘fall’ for trees. When I first began working on this poetry series and thinking about trees more deeply, I came to the conclusion that trees wouldn’t obey our seasons. So I created what I thought were important ‘seasons’ for trees: Sunleaves, Deepnight, Sapriver, Budbreak, and Windborne. Sunleaves occurs when the leaves turn red and fall off the trees.

As the days get shorter, less chlorophyll production occurs allowing other colorful chemicals like carotenoids (orange) and anthocyanin (red) to be ‘uncovered’. The fiery, gold color of fall leaves isn’t ‘produced’ in the fall perse, instead it’s revealed as the green of the chlorophyll fades away.

So the chloroplasts are becoming ‘ashen’, losing their green color as the days become shorter; at the same time, abscission cells (often with modified, weaker cell walls) are being formed where the leaf meets the branch of the tree; this means that, eventually, one hard gust of wind will knock the leaf off the branch. These withering, brittle leaves are thirsty, dying because of a lack of water and nutrient exchange with the tree itself (while leaves can produce their own energy through photosynthesis, they need water from the roots of the tree to survive).

Some parts of the leaf will be actively broken down as the leaf slowly dies, its grasp on the tree being weakened by the abscission cells, until the tree is finally rid of all the leaves and even the red and golden colors are gone, decomposing into the brown leaf litter that covers the forest floor.