The Poetical Science of Ada Lovelace

I’m currently researching British poets from 1700-1816 for a Regency period book I’m toying with; in my research I came across Ada Byron, Lady Lovelace, the daughter of the famous poet Lord Byron, who is the world’s first computer programmer. Beyond being fascinated by this woman in science narrative, I was also intrigued by what Lovelace described as ‘poetical science’. Pushed into math and science (and away from her father’s ‘insane poetry’) from a young age by her mother, Lovelace nevertheless aimed to bring poetry and science together to create something that pushed the boundaries of what either discipline could achieve alone. 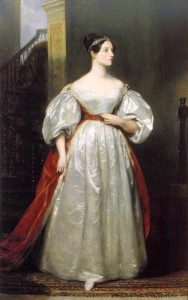 Dr. Betty Toole, who published a book on Ada Lovelace, wrote here that “In her [Ada’s] thirties she wrote her mother, if you can’t give me poetry, can’t you give me “poetical science?” Her understanding of mathematics was laced with imagination, and described in metaphors.” Perhaps it was Lovelace’s willingness to blend science, imagination, and poetry that led to her amazing foresight about the capabilities of the first ‘calculating engine’ – she predicted it could eventually be used to create music, graphics and more. Her ability to see the possibility of art through the math and science was unheard of at a time when people didn’t even see the most basic scientific uses of the calculating engine (a machine that would set the stage for the modern computer).

In an essay by Dr. Toole, one of the only scholars who seems to spend much time on Lovelace, Toole writes, “It is not a trivial trait for either a poet or a scientist to get to the heart of the matter simply, succinctly and successfully. These may be just the skills we need today”. It’s hard not to agree with Toole – poets and scientists are forever circling similar writing obstacles: how can I be concise, and accurate? How can I best pass along my intention, my information, to my readers?

But poetry and science writing generally tend to employ different methods to get at these same core questions, perhaps with detrimental results by narrowing our focus and understanding to only one type of understanding. Lovelace bridged the objectivism-subjectivism gap that plagues science and poetry, respectively, in their communication attempts. Lovelace’s dedication to bringing science and poetry together didn’t hurt her ability to comprehend or communicate; rather it gave her increased understanding of the world by giving her a more complete picture of the world. Science, mixed with poetry, improves our understanding.

Lovelace is just one historical example of how the STEM-Humanities gap hurts individuals in both disciplines; her story is a compelling argument for a liberal arts education (instead of a purely technical education) for modern citizens. Science and poetry employ different ways of thinking, talking, and acting; it seems we all need to practice both disciplines if we want to have the same clarity, inventiveness, and understanding as Lady Lovelace.

What do you think about the STEM-Humn divide – does it help or hurt our students’ education? How do you think poetry and science can be blended effectively – and how does that help increase someone’s understanding of the world? I’d love to hear your thoughts!