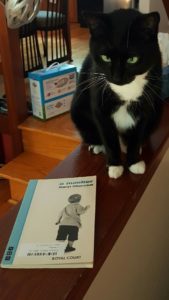 This week on ‘Bee’ Reviewed is one of the more unique plays that I’ve come across, A Number by Caryl Churchill was first staged in 2002. The play was produced around the time of the Dolly sheep cloning experiment and clearly is impacted by the ethical, moral, legal, etc. complications that cloning poses to our society.

Salter, an aging father, meets with three of his sons (two clones, one not) throughout the course of the play; he spends some of the play lying to them lying to them (in order to try to keep his growing web of lies straight) and some of it talking honestly with them about past mistakes. Bernard 1 is his first son, one he felt he didn’t raise properly, hence he cloned him into Bernard 2 to try again. Near the end of the play, with both Bernard 1 and 2 out of the picture (boy, does this part of the play happen fast!) he goes to visit another clone he’d never met, Michael Black. The two have a frustrating conversation that leaves Salter unfulfilled but speaks to whether our nature or nurture controls our attitudes and behaviors.

The play deals with ethical concerns surrounding cloning, for example how it might alter family structure and filial connections, and also ponders the nature v. nurture debate (the issue of identity is a frequent theme). I would say it ‘lightly’ or ‘loosely’ does this, because the play uses so few words and has so few events, but nothing about this play really feels light. Churchill never tells you what to think, but the sparseness of language, action, and cast leave you hungry and force you to fill in some very deliberate gaps in thought yourself.

I’ve never felt so winded by reading a play – it’s so fast paced that you’ve nearly finished it before you realize you’ve begun and so you have to read it over to make sure you caught everything. And boy oh boy is there a lot to catch – in a play of mostly white space, Churchill spins a dense, compelling, thought-provoking narrative with hardly anything happening on stage and only two actors. The emotions of the characters, despite the brevity of the dialogue, are very real and apparent and I got a good sense of each character and their motivation by the second time through the play. The plot, which happens mostly offstage and is recounted, is very suspenseful and makes for a good, chronological framework for the otherwise floating dialogue.

Nyx looks for answers: “Is this the real life? Is this just fantasy?”

I honestly feel this play would be much better performed than read but it’s still a worthy read for anyone even remotely interested in the intersection of scientific and social ethics or those fascinated by cloning. Readers beware the speed of the play – force yourself to slow down or you’ll just end up confused and irritated instead of amazed by the play’s depth and intricacy in so few words. Churchill has a very stream-of-consciousness kind of dialogue, very unusual, and so it can be difficult to get used to reading the work – typical sentence structure, punctuation, and syntax all go out the window from page one. I’ll leave you with an excellent quote about identity from Bernard 1 (speaking of Bernard 2 to Salter) that showcases this unconventional sentence structure:

“Bernard 1: and you know what he’s like, not tidy, am I tidy you don’t know do you but you’d guess not wouldn’t you but you’d be wrong there because I’m meticulous.”

If you’re looking for something to read in an hour, but that will leave you thinking for days, I’d heartily recommend this play.