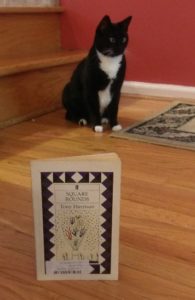 Nyx: I care not at all for your square shapes or rectangle shapes or round shapes… I care only for squirrel shapes.

I knew Tony Harrison more as a poet than a playwright which is why the play Square Rounds took me by surprise. Harrison takes on a lot with this play and I’ll admit that reading it, as opposed to seeing it performed, clearly does not do all the ideas of the play justice. There’s a lot of important stage direction in this play that can be tough to wade through and imagine.

Square Rounds deals with the ethics of science – when chemical discoveries can lead to fertilizers that could help feed all of humanity but also can lead to toxic bombs that destroy humanity physically and morally. Liebig, Haber, and Hudson and Hiram Maxim are the scientists in question, who work with nitrogen, hydrogen, and oxygen, one after the other.

The play is a bit difficult to get through because it almost always rhymes – if
you, like me, struggle with rhyming this is going to be a hard play to read. In addition, the play is pretty repetitive – you definitely will have a grasp of the ethical quandary our scientists face throughout the play. The play is also humorous but in a very dirty way, speaking often and glibly of farts and feces in the chemical conversation surrounding fertilizer.

Harrison seems to be less focused on the process of science or even the lives of scientists, opting to make the focal point of his play the morality of doing science when it can result in both good or evil. Harrison shows us that science is not ‘controllable’ – once the discovery is out of the head of the scientist, it can go anywhere (to the lamentations of the scientists who made the original discoveries). Harrison writes,

“FRITZ HABER: I pioneered fixation to fulfill/ a desperate human need and not to kill/ when I pioneered the process I had in mind/ only benefits and blessings for mankind.” 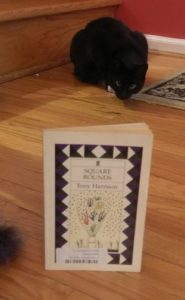 Nyx: A fart joke, you say? What is that? *looks at book suspiciously*

Hudson and Hiram Maxim develop weapons from the chemical discoveries of Liebig and Haber – the fertilizer has now almost entirely left the conversation as scientists race to build better chemical weapons (a race that ends with the World Wars). Harrison paints a dark picture of how science gets out of hand and the chaos of the stage parallels the chaos of the chemical inventions.

I would recommend this play to those who enjoy imagining the scene on stage more than the words themselves. If you’re looking for ‘real science’ there is some but it’s so hidden in rhyme it can be a struggle to retain it. The play begins fairly light-hearted but doesn’t remain that way, so if you’re not looking for serious commentary (albeit veiled with fart jokes) on where science has been used for ill in our history, look elsewhere.