On August 12th, I traveled into NYC to attend the DIY MFA Book Launch as part of the 2016 Writer’s Digest Conference. Having never attended a book launch, I was surprisingly unsure of what to expect – what my etiquette should be as an attendee and what would even happen AT the launch. Here’s what I learned last Friday. 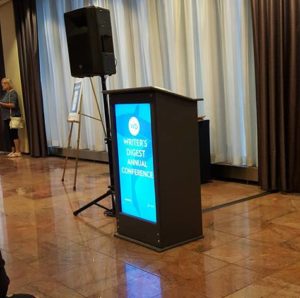 What happens at a book launch: Arriving at the launch, there’s a large stack of freshly printed DIY MFA books sitting ready to go for people to purchase. A table is set up for signings, a podium with a microphone stares down several rows of chairs already filling with writers and readers alike.

The author is introduced by an agent, the publisher, someone in connection with their book. After some applause, the author introduces their work, talks about their journey to writing and producing the work, and thanks influential people in their life. Generally, they do this without falling into the Bill Clinton trap of recounting every detail of your life in real time. And then, the author reads, in this case only for twenty minutes or so.

After the author reads, some people in the audience may be allowed to ask questions before the author is whisked away to the table to begin signing books (see below for my copy!!) and meeting fans and giving out a little bit of free swag (buttons, stickers, those kinds of things). All in all, it was a pretty low-key and fun event!

Things I learned as an attendee: 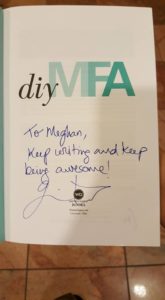 Things of note for a host:

Have any of you ever been to a book launch – or hosted one? What are your words of advice for newbie attendees and hosts?