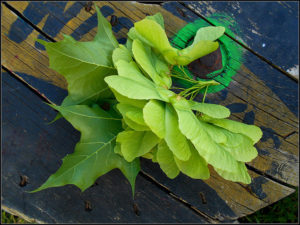 The poem is the only shape poem I’ve ever attempted, but I was inspired by the uniquely beautiful shape of the double samara – the ‘helicopter’ fruit. These seeds are characteristic of dicots (short for dicotyledons), so named because they have two (di) cotyledons (small leaves inside the seed that are the first “leaves” to appear after germination).

In sugar maples, these cotyledons store food/nutrients for the seed and, once the seed germinates, photosynthesize until true leaves can grow. I feel the poem is a bit misleading (unintentionally) where it says ‘abs orb nutrients’; I meant only that nutrients were packed into the cotyledons as they were formed – that they absorbed nutrients as the fruit grew. I learned later that some monocots (mono = one cotyledon) actually have cotyledons that absorb food stored elsewhere in the completely formed seed. In comparison to the story of monocots, I feel this line could be easily misconstrued.

When the germinated seedling gains its first true leaves, they appear broad and almost rounded compared to the cotyledons thinness and do not yet have the class sugar maple leaf shape. Following the left side of the poem, we learn that sugar maple seedlings can germinate in a thick layer of ‘humus’. Humus is a dark soil composed of decaying plant and animal matter, making it nutrient rich and good at retaining moisture while also remaining well-drained. It’s generally considered an excellent soil type for sugar maple growth.

Following the right side of the poem, we see the seed germinating. The radicle “root” is the first part of the seedling to emerge during germination. The radicle pushes down through the seed coat and snakes through the soil to find water and set up a root system, eventually growing large enough to be the tree’s ‘tap root’. The radicle grows via its apical meristem (a region of actively dividing cells that grows the tips of shoots and roots) at its tip, helping it to bury deep into the soil and look for water. This water allows for the rise of other tissues as the seedling grows larger (like true leaves, sweet for their photosynthetic production of carbohydrates). Each seed generates one radicle root and it is white in color since, like other roots, it stays underground and does not photosynthesize.