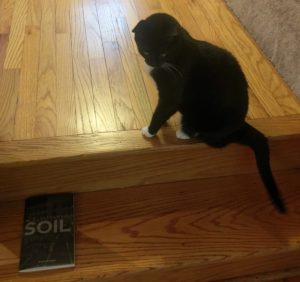 Nyx: I will let you take pictures of me only when the book you want a photo of is grey and in shadows.

This week on ‘Bee’ Reviewed is Tim Cresswell’s Soil, a poetry collection packed with detritus and reference to place, be it urban or natural. Tim Cresswell is a poet and geographer from Britain and Soil is his debut collection of poetry. I typically try not to write negative reviews, but unfortunately this collection mostly wasn’t my speed (but who knows – it could be yours!).

Each of Cresswell’s poems very clearly evokes a feeling of place, be it the airport, the countertop in an urban home, a mine fallen into disrepair, or the forest floor. We are moved constantly as Cresswell chooses to relocate us; the result of this constant relocation is that most poems failed to engage me sufficiently in their singular world before I am forced to move on, even if I revisit similar locales several times throughout the book. I would have preferred some grouping – which this collection could have used on the whole, from the very beginning of the process (to the level of which poems made it into the book, not just their order of display). It was very difficult for me to draw enough connections between poems to find any overall thread to really unite the poems, making me feel like this was a ‘hodgepodge’ more than a ‘collection’.

Cresswell has incredibly sparse language; while sometimes this was evocative in a very concise way, many times I found it dissatisfying – particularly with poems like “Footnote”, “Feverfew”, and part 20 of the longest poem “Soil”. I might even refer to some of these poems as straight lists of related terms. The almost cheeky brevity and lack of unique language in some poems, especially when contrasted with the beautiful language and imagination in their neighbors, was off-putting and made the collection feel unbalanced.

Cresswell incorporates some biology and a lot of scientific information about soil. Similar to my comment about his concise language, many of this information was simply dropped like a paragraph from a textbook into the middle of the book. This was jarring, and felt somewhat lazy, especially compared to beautiful poems like “Rare Metallophytes,” which incorporates its science in such a subtle, poetic way that you hardly realize it’s there. Indeed, some parts of “Soil” were acknowledged to be directly pulled from a song; while I’ve nothing against incorporating the work of others on occasion, the frequency to which this and the information-dropping occurred left me annoyed that I hadn’t just picked up a textbook on the history and importance of soil instead.

Overall, I would recommend this book to people who love reading the poetry of place and don’t mind a ‘collection’ of poetry where each poem must be appreciated very independently of its fellows. If your mind can very quickly switch from one task to another you may find this series less jarring than I did, and thus more enjoyable. Those who really enjoy brevity in their poems, choice language that surprises and can make you laugh, poetry in and about urban places, and, of course, soil, will probably appreciate this book. Those who like to immerse themselves in a flowing narrative will be disappointed.

A special shout out to the poems “Rowan”, “Metaphor”, and “On entering the home of the bourgeois intelligentsia for the first time” all of which, with “Rare Metallophytes” made me glad I’d picked up the book despite its many shortcomings.