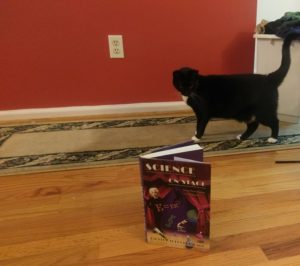 I first came across this academic resource while working on one of my honors theses in undergrad – Science on Stage: An Examination of Scientific Rhetoric in Drama. This thesis really pushed me into reading (and writing) science-theater hybrids and was inspired, in part, by reading this book. And that’s what this book mostly does – it inspires one to consider science on stage as a cultural entity, even if the book can be considered a bit biased (more than I would generally recommend for an academic source). Then again, Shepherd-Barr is breaking some ground here by collecting a whole book of science-play criticism in one place and is very upfront about her definition of science, so perhaps its unfair to judge the book as anything other than a little lax on what is considered a culture-shaking play or actual science.

Shepherd-Barr covers a lot of science plays, from the modern and popular like Copenhagen by Michael Frayn to the old and unexpected like Doctor Faustus by Christopher Marlowe, with a lot of coverage in between. The book is a good jumping off point for thinking about how science functions in plays, what can be considered science, how scientists and the process of science are portrayed, and how these science plays impact our societal perceptions of science. The book is comprised of chapters that focus on plays of different themes – physics, medicine, biology, etc. – and Shepherd-Barr also tries to touch on trends, tradition, history, and the importance of theater to science in other chapters. 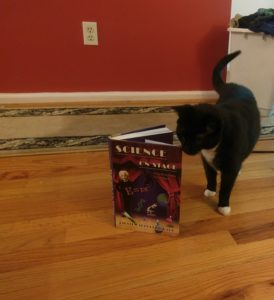 Nyx: Perhaps I shall read it, after all. Hmmm.

The book is an interesting read, if dense, but only for someone who is well-read in the science-theater genre (you won’t get much out of reading about plays you haven’t read). That being said, the book is a great starting place to look for plays that would be of interest to you as the appendix in the back is really helpful. I would recommend anyone interested in theater, or even writing plays that deal with science, pick up this book and delve into the world of science-theater hybrids.

A cautionary note: Dr. Carl Djerassi has a great article about this book and how it exaggerates the prevalence of science plays on stage, in part by having a somewhat loose definition of what a science play is. I would recommend reading his article – it’s important to recognize that Shepherd-Barr is casting a wide net, with many of the plays she mentions not having been performed frequently, if ever, and other plays featuring characters like Newton or Einstein but with no real science behind them at all.

I personally fall somewhere between Shepherd-Barr and Djerassi’s views on science-plays, not as harsh as Djerassi about the necessity of ‘real science’ to be the ultimate focus of the play but also not willing to say the barest hint of a scientist’s name qualifies a play as a science play (sorry, Darwin in Malibu). To me, each play that has a primary or secondary focus of science informs us about how our culture views science, and is thus a science play even if it doesn’t quite get around to teaching us the inner workings of a transmembrane protein. And how our culture views science is important – science cannot stand alone. So pick up this book to get a start on understanding the complexity of science plays – and make your own decision about what a science play is to you!

Nice post. Recently I got interested in Science Plays as a genre as I translated Copenhagen into Kannada, a language from South of India. You make a valid point about two extreme views on the definition of “Science Theatre”. In this part of the world, Brecht’s Galileo has been translated into number of Indian languages and at least in Kannada it ran quite successfully.

Hi Shashidhar! Thanks for the comment – works in translation are really fascinating, particularly given how difficult it can be to really emulate the writing style of the first author. Some languages don’t even offer the same words/rhymes etc. as others, making translations particularly tricky – I actually wrote an article for The Key Reporter about that here. I also think it’s fascinating that ‘hit works’ in one culture can have an almost non-existent presence in another. It’s nice to see that Brecht’s Galileo has reach all over the globe!