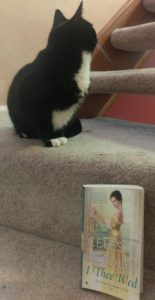 Nyx, doing a more typical heroine pose for a romance novel cover, looking up toward her tall, dark, handsome man (a.k.a. scratching post)

I have a confession – I used to be an avid reader of romance. About five years ago, I worked as a reviewer for three blogs and also had my own personal blog where I held contests and centralized all my reviews. Unfortunately, college quickly forced me to re prioritize (homework? sleep? eating? pick two, and forget about the rest of life!). I was delighted when I heard about Celeste Bradley’s most recent regency romance novel, I Thee Wed, which came out in May of 2016 and features not one but two scientists! This was a book with relevance to this blog, if only in how we portray science in mass market paperback.

Orion Worthington is an aspiring scientist in 19th century England with lofty ambitions, working for Sir Geoffrey Blayne as a lab assistant. Hoping to put his family name behind him and advance into the upper echelons of science-society, the last thing he needs is his own personal scandal with Blayne’s niece, Italian scientist Francesca Penrose. Francesca and Orion both agree that their mutual desire is impacting their research goals and something must be done to remove the distraction that temptation provides. But will one night of passion be enough experimentation to last a lifetime? (As any good scientist knows, all experiments must be repeated many times over. So right from the get-go, I’m going to say… no).

This book has all the classic elements of a well written historical romance: there is a great cast of warm, eclectic supporting characters and a completely contrived plot that gets resolved miraculously at the end (literally. the answer here is ‘magic’) which could have been resolved with a simple conversation earlier on. There’s hot, passionate kisses and daydreaming and sex and no one can keep their hands off one another. The dialogue is humorous and both Francesca and Orion are compelling characters. If you’re into romance novels of the historical variety, I would recommend this book – on an A+ to F/Did Not Finish scale, this book would come in at a solid B-. Above average, if only slightly.

But what is compelling and unique about this book is its relationship with science, particularly in that it seems to reflect an incorrect, but socially popular, view of science. The book’s major scientific discovery comes as a singular epiphany and one night of work by Orion, alone in a lab; that discovery is then presented to the scientific community about 16-24 hours later at a conference. In reality, science can involve epiphanies (though they generally need extensive tweaking) – but even in the 1800s, experiments had to be rigorously repeated. Science is slow; having the epiphany does not guarantee you’ll have figured it out the first time around or that your experiment will run without issue (actually, when does that ever happen?). And after getting your experiment to run, repetition and independent verification are required before bringing forth the results to the community (though today that process is more rigorous than in the 1800s, I’m sure).

Additionally, Orion is never seen doing research for his experiments in that he looks at no other literature. Science often requires us to stop and consult the work of others; it is not the work of a mad genius, alone in his lab, but of a collective mind, thriving. To someone not involved in science, I wonder if Bradley’s interpretation of scientists as lone geniuses with perfect epiphanies and perfect results after one night of work would seem odd (the way it did to me) or if this is, truly, the way modern society still understands the process and people of science.

Overall, the book remains light on discussions of scientific theory, touching briefly and vaguely on Lamarck and evolutionary theory, even as the process of science frames the overall plot. Charles ‘Charlie’ Darwin makes an appearance, which I found really humorous. I would even go so far as to say Bradley was daring in portraying a child-like Darwin, this serious scientific figure whose theory changed the course of biology, as a mildly asthmatic, whining troublemaker. This exchange in the epilogue particularly amused me:

“You’re older than Charlie,” he reminded her. “You should have kept him out of the deepest water.”

Attie was clearly offended. “I’m helping him. He needs to get more fit if he is to survive.”

Overdone? Perhaps. But just the kind of light-hearted, dramatic humor to end this kind of book.