First published in Mind Murals magazine, page 11, in the Spring of 2016. Listen to it read aloud here.

This poem blossomed out of I: Seeding in which I wrote about the way a strong wind can affect the shape of a growing sapling. Shortly after writing this poem, I learned that sugar maple trees are primarily wind-pollinated, not pollinated by bees as I had originally been led to believe in my previous research (this discovery is relatively new; Cornell’s website uses materials from 1996 which indicate bees pollinate sugar maple flowers but more recent studies show it’s actually primarily the wind). I felt it was necessary to write a follow-up about the relationship between the wind and the trees, when they grew older. 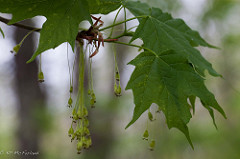 Sugar maple trees begin to produce flowers around thirty years of age (this is the minimum for fruit-bearing) and the process of flowering is known as inflorescence. During good years (usually cyclical every two to five years depending on environmental conditions), the flowers fill the tree canopy so heavily that the tree takes on a yellowish cast. Most sugar maple trees will produce flowers of entirely male parts, those of entirely female parts, and those that have both male and female parts.

Pollen grains are (i.e. male spores) and can be found in the pollen sac, or microsporangium, before being distributed by wind (in the case of sugar maples). It’s important to note that all pollen grains are spores, but not all spores are pollen grains as there are also female spores (megaspores). Primitive plants and seed-bearing plants utilize spores differently in reproduction.

If a sugar maple flower is pollinated, it develops into a fruit – what we would colloquially call a ‘helicopter seed’ but can also be called a double samara. After pollination, the flower ripens into a fruit for about two weeks before each samara falls off the tree and is blown by the wind all over the land. The ‘winged’ shape of the samara lends itself well to being carried by wind through forests and fields, over snow and sand. Eventually, the samara settles and germinates if the conditions are right.