‘Bee’ Reviewed: An Experiment with an Air Pump 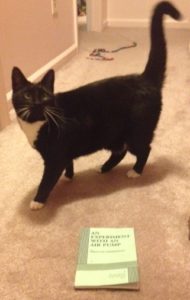 Nyx, looking up tearfully at the heavens after finishing the play…

An Experiment with an Air Pump is a play written in 2000 by British playwright Shelagh Stephenson, inspired by the painting ‘An Experiment on a Bird in the Air Pump, a 1768 oil-on-canvas by Joseph Wright of Derby (picture below).

Stephenson writes what is, so far, my favorite science play. Grappling with two times frames, one in 1799 and one in 1999, she uses a singular house to draw incredible parallels between the morals, actions, and goals of the two groups of people that lived there. Stephenson manages to craft incredible concise, impactful dialogue as she works with twice the time and cast of characters as a typical show.

Stephenson follows the cast of characters making up Wright’s painting in the 1799 scenes, with young lovers, writers, scientists, and family members all playing a role. In the 1999 scene, we follow scientist Ellen and her husband Tom, owners of the home, as they work on selling off the property and discover a dead body hidden under the stairs (presumably one of the 1799 characters). 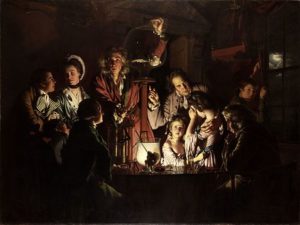 An Experiment on a Bird in an Air Pump by Joseph Wright of Derby, Public Domain

This murder-mystery sort of appeal gives the play a lot of suspense, and the clever dialogue between Phil, the 1999 handyman, Ellen, Tom (a humanities professor), and Kate (a scientist with shaky moral principles) all combine with the slower, more direct 1799 dialogue to paint one complete, no-loose-ends picture by the end of the play. Even better, Stephenson chooses to focus on stem-cell research and gene therapy, both looming as big ethical discussions in the very near future.

Every time I pick up this play, I feel like I’ve discovered something new Stephenson has done to make me question everything I know – about the links between science and art, the morality of the scientist, the dangers and benefits of scientific progress, and the nature of humanity, with our history creating our present. If I could recommend a play to get you hooked on the science-drama fusion, my friends and followers this would be it. 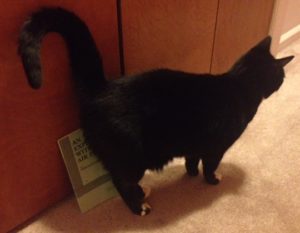 How Nyx actually feels about the book – a much different review.

The dialogue is excellent, the plot is fast-paced and intriguing, but it’s the way Stephenson weaves parallels between the two environments to teach us about scientific ethics that really turns the play from good to unforgettable. Stephenson writes the suicide note for science, leaving a dire warning about what happens when we continue to pursue science with no ethical considerations. The play is masterful, managing to bleed you emotionally and mentally dry each time you read it and yet leave within you the desire to come back for more. And perhaps it is this exact feeling of wonder, curiosity – rapture – that Stephenson inspires in her writing that is the very essence of her warning about science.