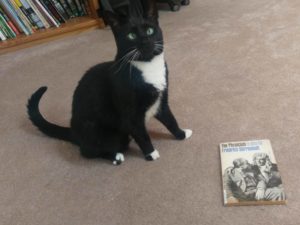 Nyx, looking confusedly up to the future of physics with a saucy turn to her front, left paw…

I first reviewed this play for National Book Review Month, an awesome brainchild of SUNY Geneseo, and have expanded upon that review here. The edition of The Physicists that I read was translated by James Kirkup.

Friedrich Durrenmatt’s The Physicists is a delightful and sometimes silly play filled with intrigue, science, and murder, all leading up to an incredible plot twist that will leave your heart hammering and head swimming from the page-turning, gut-wrenching dialogue. Durrenmatt, a Swiss author, was heavily influence by the events of WWII when writing the play in 1961 and, in the play’s more serious moments towards the end, the gravity of the events of WWII stand in the background of the play’s dialogue.

The play takes place in an insane asylum and follows three patients, all nuclear physicists. New arrivals Herbert Beutler and Ernst Ernesti believe they are Newton and Einstein respectively, while long-term resident, Johann Mobius, believes he is visited by King Solomon. After another (yes, you read another) female nurse is murdered, the authorities are at their wits ends with the madhouse; the lead psychiatrist, Dr. Mathilde von Zahnd, is forced to tighten security by bringing in new, male nurses to serve as guards. As the patients begin to get restless one night, they reveal their true selves and have a conversation that could end up changing the world…

The play is fast paced and incredibly humorous. The plot twist at the end is masterfully executed with precise and cutting dialogue that leaves you thinking about the future of physics and the ethics of science. As an example of Durrenmatt’s ability to concisely sum up an entire ethical argument, he writes:

“NEWTON: Is it because I strangled the nurse that you want to arrest me, or because it was I who paved the way for the atomic bomb?”

In one line, we are confronted with the huge ethical question of the role of the scientist in the outcome of their discoveries. Is Newton as complicit in the deaths of those who died via the atomic bomb (which his discoveries helped create) as he is in the death of the nurse he just directly murdered? Towards the end of the play, Durrenmatt engages with this ethical idea and more in a way that is stunning both in brevity and wit, and in the richness of the ideas’ direct societal applications. Despite being over fifty years old, this play retains relevance in how it grapples with our changing scientific reality.

Overall, this is masterful play with well-balanced satire; The Physicists is accessible to every audience regardless of someone’s familiarity with physics.