First published in Mind Murals, page 9, in the Spring of 2016. Listen to it read aloud here.

Biopoetics will be a series of posts in which I explain the science that went into my biology-tinged poetry, in 400 words or less, no matter how heavy or light the poem is on science. I: Seedling arose from looking at a picture of a tree, seriously bent by the force of the wind.

When a seed falls off a sugar maple tree it is blown around by the wind and will often land in ‘leaf litter’ – accumulated leaves on the bottom of a forest floor – or ‘humus’ – an organic substance made up of decaying plant and animal matter. Humus retains water and provides nutrients, so sugar maple trees grow well in humus.

When the seed germinates, it sends roots downward to obtain water and a shoot (generally white, like the roots, at first) up through the soil to seek the sunlight. The shoot turns green and gains leaves only after breaking the surface of the soil and being subjected to environmental forces like sunlight and wind. 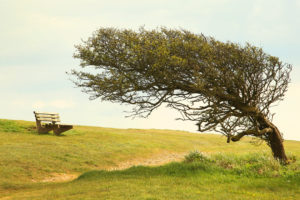 Strong winds can ‘reground’ a plant, by making it grow nearly horizontal; young plants are particularly susceptible to this as they don’t have significant girth to help them resist the force of the wind. This can hurt plants by reducing their vertical (primary) growth, and thus their ability to compete with other plants for sunlight. Wind can also hurt a plant’s ability to grow by replacing ‘wet’ air around the leaves with drier air [causing increased rates of transpiration (basically just water lost to air)], by breaking thin branches or ripping off leaves [thus decreasing photosynthetic potential], and by pulling trees so hard their roots stretch. This last problem increases water stress for the plant as the root-soil connection is broken and less water is absorbed from the surrounding soils (it can also break the roots).

As a tree grows, it obtains girth by growing its vascular cambium (the dark rings in a tree stump that are responsible for producing that year’s xylem and phloem tissue, the light part of the rings). Water stress (basically not enough water) caused by the wind can make a tree thinner than average for its years; periods of water stress lead to smaller cells and/or less cells produced during the growing season, creating thinner rings and thus a more lean-looking tree. By growing wider, year after year, the tree can become more resistant to the structural stress of the wind as it ages.